Day 3 - Dharmapuri to Chennai - Dosas get done in Dharmapuri 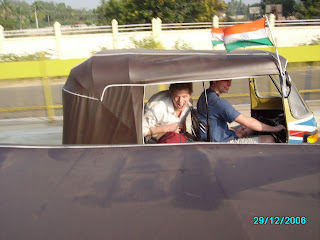 After the hell of potholes and psychotic night-time bus gauntlets last night I have to confess that the 300 odd kilometres of relatively flat highway today was a relief on my absolutely knackered behind. Every time I get up these days for a walk I feel like my arse has been to a particularly vicious sado-masochistic whipfest where the nice lady gets a little carried away and gets out the planks of wood.

Ooooops did I say that out loud...? 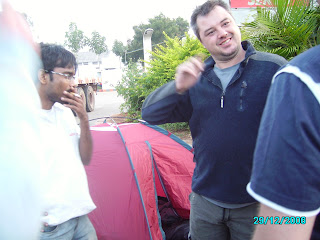 Turns out that last nights gamble to race it to Dharmapuri paid off. Initially I had to talk the lads into it and we nearly fell out but this morning it turned out that 4 of the teams had made that effort.

And hell there are some HARDCORE teams out there!

We set off at sunrise, Ivan at the helm and, stopping at a disused oil station who do we see...The Calamity Crew sleepin in a tent on the disused station forecourt. 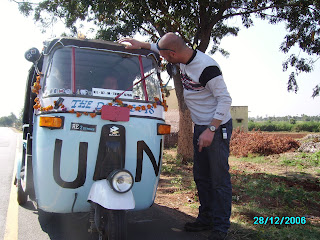 A while later 4 other teams caught up and we found ourselves in convoy up the 46 but we got seperated somewhere on the highway after we all stopped for petrol.

We filled up together and chatted to the attendents, the teams setting off one by one up the highway. As we went to catch them up about 40km down the road we broke down.

Ivan - "No idea - it's just not going anywhere" 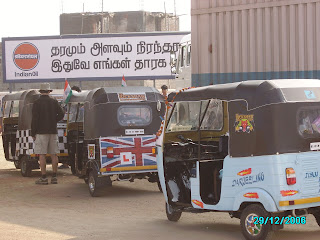 The locals were brilliant and rushed to our aid like pit stop attendents but ya know, a bit slower and with a little less idea what we were saying. Our Tamil is not exactly great.

Turns out that the bastards at the station charged us for a full tank of 8 litres at about 350 rupees and, while we were busy chatting they were busy not filling our tanks and pocketing our cash!

So one breakdown later, we're being driven around on the reserve tank by the Michael Schumacher of rickshaws for a fix-up in some armpit of an Indian village and having a late breakfast of bananas and water.

now we're in Chennai chillin with 3 other teams in the Comfort Inn. Last stop before the marathon run of highway number 5 on the East coast.

A message from the cold, wet back of beyond here...Jools from FLCC in Sherborne says "hi boys!" and wants you to eat some Dosa & Samber just for her!

Hope the engine is feeling better!

Hello guys, it's Andy's friend, Panda Jenn here. Just to say gooood luck, the blog is an awesome read, happy new year, don't get sick, and... I think using the UN sign without authorisation it illegal. Not that you'll be able to remember what that is, after so many days in India...

er, geeky question, but how far do you do on a tank of gas?

About 20km I think Al - Nick what was the final count?
The damn thing flucuated as the engines were new and just warming up

Damn right were hardcore - you left business cards at toll gates - and it pissed us off - we decided to drive till the toll gates had not heard of rickshaws....about 4am we stopped where we were and setup camp - you woke us up and we went via vijawada or vishywara or something - around madras up the NH5...and thats why we beat your asses!

We need a rematch Chaos!