Day 2 - A dice with death in the night 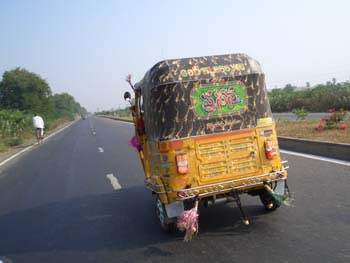 We got to Salem much faster than expected at about 2:30, and there was still daylight. With the usual lack of planning opinion was split and Nick wanted to keep going east to Pondicherry, Ivan wanted to stay where we were.

I opted to push on, figuring that if the other lads got here earlier than us they would take a significant lead of about about 80km in Dharmapuri. I argued the case and the guys begrudgingly pushed on. I argued that we were in a race and that the scenic route wasn't gonna get us to the finish any faster. Ivan looked through the Rough Guide and Dharmapuri wasn't in it but I goaded them both on and said that surely we were well enough travelled to be able to handle a fleapit for a night. There was no way I wanted to lose the others and travel the whole thing on our own.

As the road rapidly turned from tarmac to gravel I started to seriously regret my decision and after a while the sun dropped out of the sky.

Dusk was nightmarish. It seems that on Indian roads, to save a bit of money, vehicles don't bother to use their lights until it's REALLY dark and they need to use them to see. None of that "using your lights for visibility" rubbish out here!

The psychotic buses, already something that got my hairs up in the daytime, actually got faster at night, maneuvering like motorbikes, except that now you couldn't see them until they were right up your arse. Already having looked one of these in the eye we were now forced to drive just inches away from them in pitch blackness. And to make things worse the road was starting to look like the acne-ridden face of a McDonalds employee. 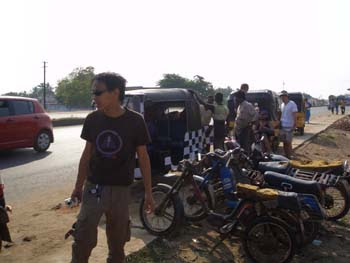 After one close shave too many, The Dosas parked up on the side of the road next to an electricity substation and waited for dusk to pass into night. With night now on us we were brickin it about carryin on and I went into the substation and tried to blag some space on the floor. The fella wasn't havin any of that and unlike Calamity Crew we hadn't brought any camping gear.

Mosquitoes all over our faces we had to make a decision on whether to stay there and sleep in the rickshaw or chance it on the road of death.

India at night gets bloody cold so when we started shivering we realised that we couldn't really hang around. Me and Ivan took up posts as wingmen, checking out the back for oncoming and advancing traffic. The windscreen was dusty and the oncoming light just diffused all over the windscreen so you couldn't see anything at all so Nick was driving blind. 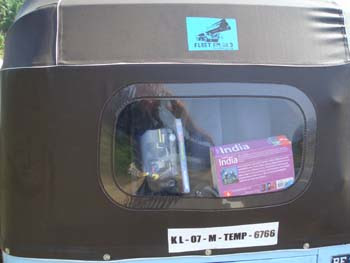 Finally we pulled into Dharmapuri, exhausted with our nerves frazzled, found some food and the web and hit the hay.