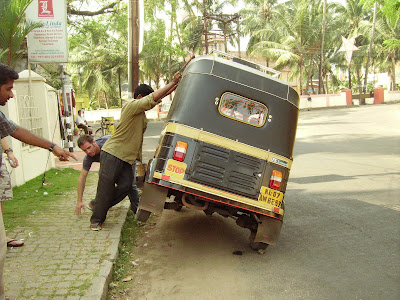 The rickshaws are arriving tonight and we're getting up at 6am to pimp them before our game of cricket at 10. We set off at Noon.

Today, feeling like perhaps we need to learn how to drive one of these things, we pulled aside a rickshaw driver on the streets and asked if we could give his badboy a roadtest.

First up was Nick. I have noticed that Rickshaws bear an uncanny resemblance to mopeds and I think that Nick had a pretty good idea of how these things work from having ridden motorbikes.

Armed with a rudimentary knowledge of motors Nick cranked up the gas and we found ourselves speeding through the streets of Cochin at maybe 15mph. This in itself was not overly terrifying. The buses that careered up behind us at 70mph were though. Even with Nick in full control of the thing I couldn't help thinking I was about as big as a cardomon boiling in a large bowl of curry.

Ivan stepped up to the wheel next. Nick cleverly climbed out. Cranking up the gas pedal he whupped the engine up so that it had almost enough power to take off. With his hand on the left handle he pulled up the clutch and put it into gear.

We shot forwards, the contents of my arse being left a few feet behind before the thing spluttered and stalled sending me square through the back of his head. Things didn't get a whole lot better as we bounced up and down the road like a drunken kangaroo.

Then things got worse. I got in. Without much of a clue what the pedals or controls do, a pretty elementary understanding of the concept of left and right and little or no hand-eye coordination I found myself alone in the rickshaw with just the owner for company while Ivan and Nick crouched down for safety behind a bush.

I proceeded to stall the engine and nearly ran over a goat before the driver shatched back the controls, and u-turned us back to the hotel in front of an incoming lorry.

So between us we have one competent driver and we're setting off tomorrow and we still have no plan. Could be interesting.