Day 7: Something a bit strange happening in the team

We figure that the other lads have taken the cut out route and we've thrown away all the work we put in today. They'll be 60km ahead on clear roads having wasted no time here.

If that's the case we will have slipped into at least fourth place, probably behind the pack of three and I estimate that we have 3 days of increasingly difficult roads as we head to the hills. 2 days will be spent on pretty much the only road through West Bengal and I reckon that will be a test of speed, wits and discipline to try to keep it together. I think the roads are going to get a lot worse.

After that Darjeeling is a steep climb. According to the guidebook the trip up the road to Darjeeling would take a Jeep 6 hours. We may need to retune the rickshaw for climbing but I reckon that a day should be put aside just for the home stretch.

From what we hear that last bit is a real test of nerve with hairpin bends, mental psychotic tourist buses and 4x4s with sheer drops on either side.

So this race to the finish is getting rather tense actually.

I gotta say though that one thing is bothering me at this point.

I think that Nick is losing his mind. 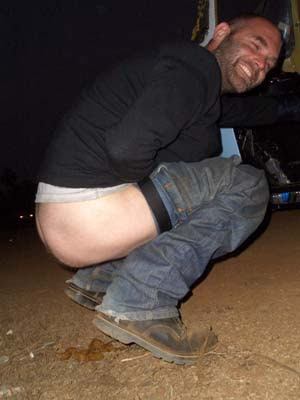 He is bloody exhausted. Every time he opens his mouth he only talks about winning "the race" - he's bloody well lost it! The "race" is a thing he seems to have talked himself into. At first I was up for it, all I want to do is cane the shit out of a rickshaw, but he seems intent on winning at any cost. He is a mess.

Take a look at him in the photo above and you can see him takin a really runny shit in Calcutta. But if you look at his face, he's FUCKED. He can barely stand up and earlier on, driving down the Calcutta Bridge he nearly ran this guy over. His eyes had closed on the wheel and he took a major last minute swerve to avoid the guy.

I bet if you asked him he wouldn't remember. He just drives and reacts and drives and has not even NOTICED the fact he's in India for a while.

The fact that I haven't been ALLOWED to drive the rickshaw that me and Ivan put together in the first place by him is really pissing me off too. Who the fuck does he think he is! He grabs the drivers seat whenever he wants but me and Ivan are too laid back to say anything but it's pissing me and Ivan off quite a bit.

It's as though we're on Nicks Ego Trip.

Now where the hell is Ivan!? He's been gone about 4 hours! I'm off to have dinner at some random backstreet cafe... 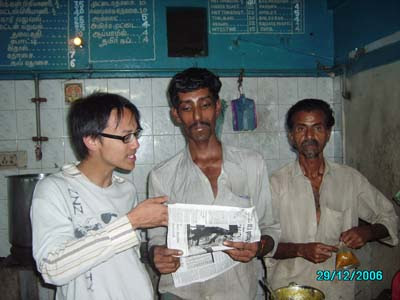