Nick has finally relinquished control of the wheel on the flat surface of National Highway 60. With Ivan at the wheel I looked out the back

"There's a rickshaw behind us! It's one of ours! But who are they!?"

The green rickshaw behind us was one we'd never seen before. 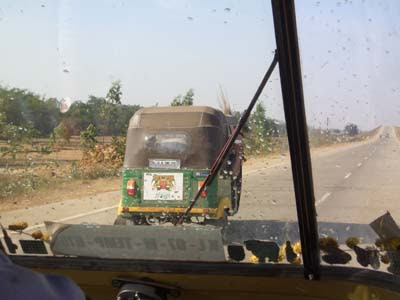 As they pulled alongside us we tried to catch up and work out how the hell these lads had got so far so fast and what they had planned. 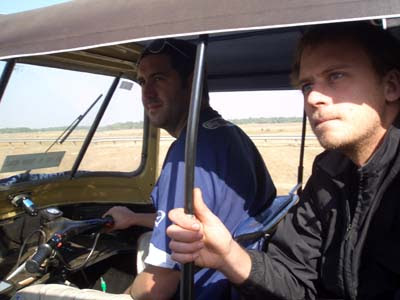 Each side was lying through their teeth, us claiming to have not done much night driving, them saying that they stopped every night at 5pm. That's GOT to be bullshit if they are this far up! They then said they intended to stay in Calcutta tonight and we said we would too, even though we intend to turn off the highway 60km before and go to Bardhaman, 200km north of Calcutta and cut out Calcutta completely. Woah... Do I get extra points for that tongue-twisting alliteration or what!

The Calamity Crew seem to be claiming to be at Calcutta already from what we are getting from the Shrimpers, but that doesn't make a lot of sense. The other three teams are most likely to be smashing their rickshaws to smithereens right now in Pothole City somewhere behind us.