We stayed in some cheap shithole last night after driving around Calcutta for ages trying to avoid getting killed and as usual we set off pretty early.

The potholes on the road out of Calcutta are not particularly deep but they are very wide. Looking from one side of a typical pothole to the other on this road is not unlike contemplating a channel crossing, but with perhaps a bit more turbulence and nausea thrown in. Taking the outer rim of one of these circuits, Nick shouted out

I knew exactly what he was talking about as he swerved the Dosamobil at the last minute out of the way of a red bus, hurtling towards us like a comet.

I have a theory about buses in India, based on our experience of them.,

I think that basically they are colour-coded according to the type of driver at the wheel.

I think that green is assigned to any bus driver who has passed their driving test or perhaps has even been on a bus once in their life in any capacity. Green buses account for only 2 of the buses that have nearly killed us today.

Your bus is painted blue if you have failed your test or if you've never driven before (note that the Dosamobil is also blue and I've failed my test 3 times...) Blue buses make up about 25 of the near misses registered.

Red, the colour of London buses, are given to you if you've been released from a mental institution or from prison on driving-related offences. I imagine it's easier to clean the blood off if you paint it this colour.

On wingman duty today I have made a point of shouting out the colour and Nick takes the appropriate action... 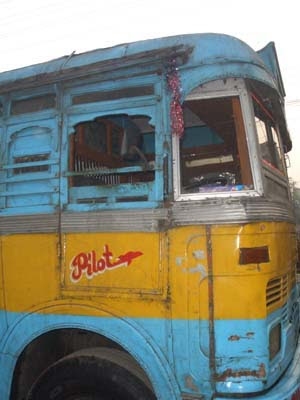