We arrived in Visakhapatnum at about 2am and trawled up and down trying to find the bloody hotel that the other three teams were at. I didn't particularly think it mattered that we were with them as it was 3 in the morning anyway but the others were adamant that we stay at that hotel.

This meant that we ended up combing the back alleys of this Indian port town of Northeastern Andhra Pradesh, our rickshaw getting chased by dogs, looking for a hotel with no map and no idea of what the place was called. 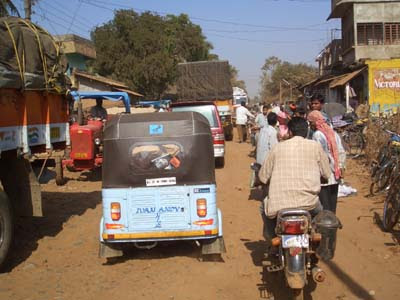 In the end, in despair we paid a rickshaw driver to take us to the place, which we found, to no-ones surprise was in completely the opposite direction to the route we were taking.

Ivan deceided to jump out and ride with the rickshaw driver and I stayed in the Dosamobil to see if Nick could keep up.

As usual, we'd managed to find ourselves caught behind the Damon Hill of Rickshaws and Ivan peeled away, caning through red lights and taking turns so fast me and Nick winced. The bloody rickshaw went up on 2 wheels so many times! Nick still has a long way to go to be able to match skills like that! 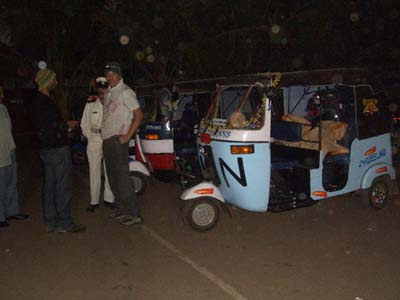 The hotel was on the outskirts of town on the beach road and overlooked the Bay of Bengal. It was bloody expensive too and seemed to have no protection against the legions of mosquitoes, but at that time in the morning I was so knackered I didn't even care.