I hope the traffic calms down and that nick gets enough sleep soon - my lungs are starting to corrode.

Earlier on today we saw this landrover filled to bursting with locals on the highway. There were also 6 people on the rear bumper and 4 clinging to each side. Ivan, being renowned for his financial acumen and money-saving tendencies said

"I hope they got that half-price" 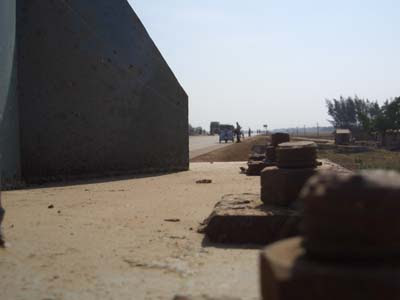 After the bribe this morning in Orissa, me and Nick were really paranoid it would happen all the way up Orissa and over lunch at the A1 plaza we discussed what we'd do if it happened again.

"Don't be silly lads" Ivan said, "you're just blowing it out of all proportion it won't happen again"

I had heard only bad things about Orissa up til this point and was pretty sure we would get hassled all the way through Orissa. Ivan, the professional gambler had only one thing to say

We're now in West Bengal and we didn't get asked for a single bribe more. I haven't paid my stake though. Don't tell him!