Nick has been talking a lot of shite this morning.

He is so tired at the wheel he's just been repeating himself and I don't know if he's aware of what he's saying. Needless to say, me and Ivan don't feel too safe in the back here, while Nick rants on and on about "the race" and how he would love to take the rickshaw back to Cochin if we make it to the end.

It's actually pretty dull in the rickshaw at the moment, Ivan is glued to his book and I've phased Nicks voice out of my range of hearing as he has just droned on

"So do you think we're gonna win?" about 100 times this morning. He also keeps going on and on about the Mongol Rally and about how he's gonna win that. 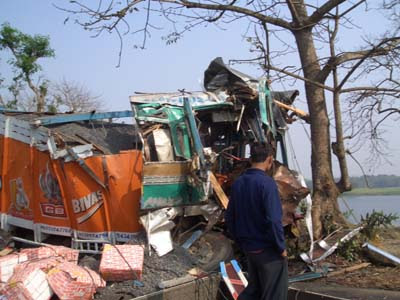 More worrying though is a brief conversation we've just had

"I hope that there's an accident behind us or something." he said, "That will hold up any of the other drivers behind us. eh? eh?! what do you think?"

"I think you're a sick bastard Nick"

He's taking this WAY more seriously than I thought was possible and that statement has confirmed what I first thought. The guy at the wheel has lost sight of why we're here.