We've missed our turn for the shortcut which would have but out Calcutta and delivered us onto the 34, north of the city and clear to Darjeeling. The shitter of it is that now we are in the middle of Calcutta and it is fucking mental.

I've been around the world and witnessed some stupid driving in my time but this takes the biscuit. 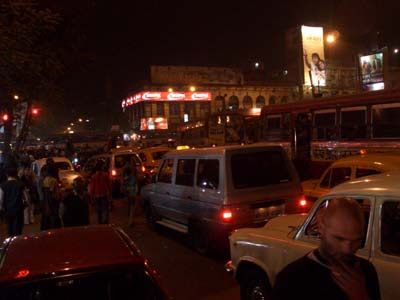 Cars, buses, bikes and trams vie with cows and rickshaws for any lane. It's all fair game and the juggernauts steam along at terrifying speeds pulling off maneuvres you expect from motorbikes! Stopping allowance is less than a foot and clearance of about an inch to the side on overtaking, which means that Wingman duties have nearly seen me lose my head more than once and my nerves are shot. 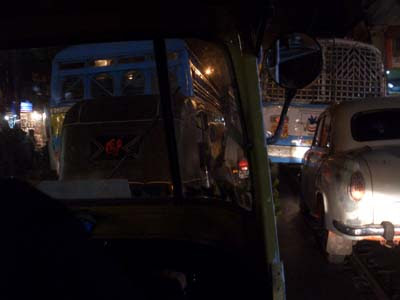 When you add in the current state of Nick (battered) this has led to some hair-raising, white-knuckle shit.

Nick is now asleep in the back cos the stress of this has taken it's toll. We asked a local engineer for directions and he's advised us to chill for a bit then head north. We've decided it best to leave Nick to sleep it off and let the traffic die down, which we reckon should be about 9:30pm, then take off to the outskirts of town, find the 34 and bed down for the night. 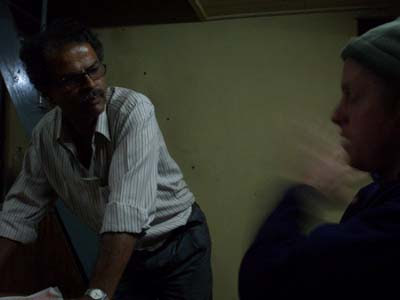 Ivan has gone off to the checkpoint hotel to see if there was anything we need to do. I'm sittin in the rickshaw, writing and makin sure Nick doesn't get raped or anything. 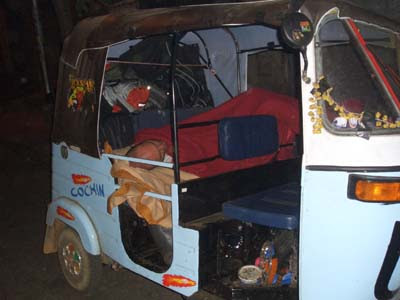 Andy! On with it man!!! It's a perfect spring day in California, the surf is up, but I am sitting around in my wife-beater with a six of beer and your blog page on the laptop waiting for the showdown.

I'm movin on it John!

My apologies I've been sat here with a girl and a beer and I've been a little distracted! Here we blow...