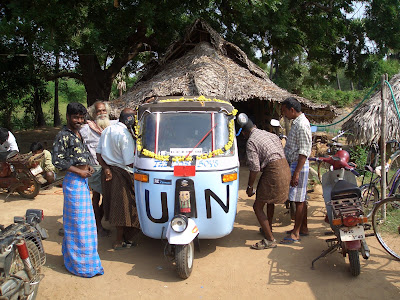 After running out of fuel chasing the Pack of Three (The Yanks, Blundebuss and Punkah Pelham) as detailed in the last post, we stopped and got fixed up by a roadside mechanic in his tiny little straw-roofed workshop.

The fella came out to the roadside and, seeing that our tank was out he switched us onto the reserve tank and drove the ride round to his workshop, where he filled the tank up.

Then he looked up and down the engine, tightened some things and sent us on our way, now a couple of hours behind the Pack of Three.

For some reason though, after this little tune-up our ride was behaving quite strangely.

At one point, we got overtaken by a sports car. Nick, not thinking, hit the Rickshaw into full throttle and we roared after the car, the acceleration clear knockin the wind out of me.

As we shot past the guy's right side you could see him look, double take, rub his eyes and look again. He couldn't believe he'd been done by a rickshaw!