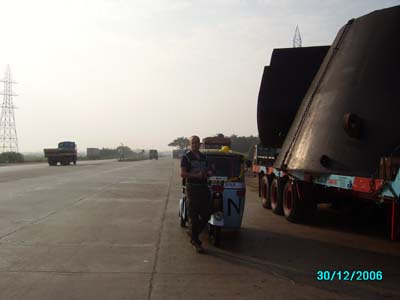 Last nights night drive was amazing. After midnight, with insomniac euphoria kicking in the danger was heightened and Nick at the wheel seemed impervious to the biting cold.

I had pretty much put all my clothes on and Ivn was under his flimsy travel towel shivering.

We later found out that at the front, where Nick usually was, you didn't get NEARLY as much of the windchill that you got at the back. The wind seemed to traverse the windshield and make it's way round to the back seats where it would rip any warmth away from me and Ivan leaving us painfully cold.

I was hung out the window playing wingman, looking out through the blackness at headlights making their way towards us. I would shout out warnings to Nick of approaching hazards, cos in his mirror all he could see was headlights of varying sizes and it wasn't ever obvious what the hell it was or how far it was away.

To tell the truth though, I couldn't really make out much more looking directly into the headlights either, as I would just get blinded by them so I would shout out something like,

...and a Lorry would thunder past half a minute later. Doh!

We saw some pretty mad driving too.

In addition to the fact that so many vehicles travel with no lights on at all and people and cyclists are invisible until you're 20cm away from them, there are also the riles of Indian roads to deal with.

The further north we go the less coherent the rules are and I wonder why there is even a central reservation at all. Both sides of the dual carriageway are fair game for vehicles who want to travel in any direction it seems.

As I write, there is a rickshaw going up the other road parallel to us in the middle of the other side of the road and coming head-on towards us is a pretty constant stream of traffic. I've become so immune to this phenomenon that I just carry on as if nothing unusual is happening, but at night this issue is a tiny bit more scary!

Any time we went to overtake last night we pulled out and found ourselves staring into the grille of an oncoming lorry. It's quite funny on the one hand, but a bit annoying on the other and completely scary in all cases!