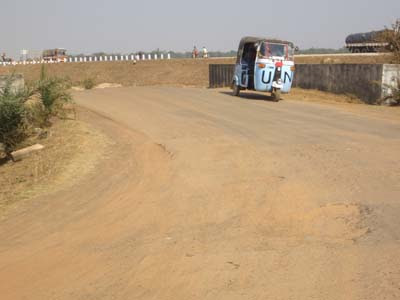 It's been winding roads through really claustrophobic villages for the last couple of hours.

Orissa is a completely different place to what we've experienced thus far. Where Andhra Pradesh was predominantly red and Tamil Nadu was mainly green and yellow, Orissa is very defintitely grey. With a poor first impression me and Nick are already paranoid, especially as everyone we've spoken to has said that Orissa is bandit country. From where we're sitting it certainly looks that way.

The 2nd poorest state in India, Orissa definitely looks the part Squatting men beg and women with hollow eyes line the roadside. I've just seen a guy on crutches asleep by the roadside.

Another state, another language too. The Orissans speak Oriyi and so far not a word of English. It's like we cross into a completely new country every time we cross a state line.

The Orissan state capital, Bhubaneshwar, witnessed one of the most significant battles in India's history in 262BC when the Mauryan Emporor Asoka, having massacred his Kalingan opponents, converted to Buddhism after seeing the horrors of war, and laid the foundations for one of the great empires of world history.