The tank ran dry. We're in the middle of the desert.

The problem is that this thing doesn't have a fuel gauge so when it runs out of gas it just sort of sneaks up and bites you on the arse. In an unpleasant way. And cos the engine is new the fuel consumption rate has been changing.

One other thing is that you can't say "fill up the tank" and pay them for whatever they fill up. Before you fill up, you need to tell them how much you want, which involves having to work out how much space you've got in the tank, which we've been doing consistently badly. 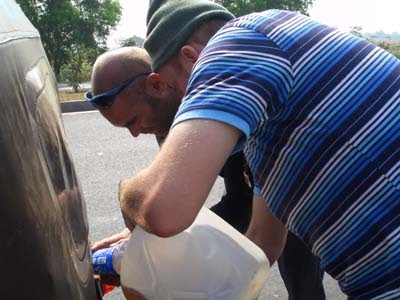 I decided to try out the Lonely Planet phrases in the back of the book and flicked to the section marked "Telugu" at the top, the native dialect of Andhra Pradesh.

I was greeted with a blank expression.

"Tumhala English yeta ka?" I said more slowly and a bit louder like a typical English person as though it would make him understand me better.

Then I looked back at my phrasebook and saw that the bloody title "Telugu" was at the bottom of the page and I had been attempting to talk to the guy in Marathi.

Well they never said it was gonna be easy when you signed up for it did they!

Yvonne can you do me a favour and take a look at www.theadventuresofminiandy.com - do you think it would be possible to get a pic of your grandad or any of the other kungfu movie stars with our mini-Hero?