The apathy in road direction coherence was most clearly illustrated by this one incident.

We were driving along and I leaned out the window to do wingman duties.

"Lorry coming in fast!" I shouted and pulled my head back in to avoid losing it.

10 seconds later it hadn't passed yet

"What happened to the lorry?" asked Nick

"Oh." I said, "He just decided to change lanes and overtake us by going in the other road instead." 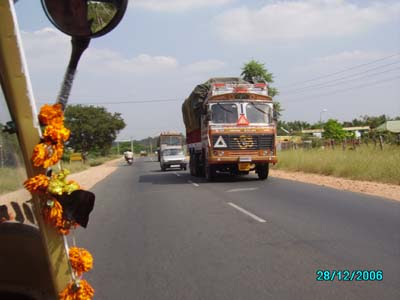 Sure enough, when we looked across the dual carriageway this maniac and his fully-loaded lorry was pulling up alongside us but STRAIGHT into the oncoming traffic in the other lane!

Now we had assumed that the reason that a driver would do this was practical, to allow them the opportunity to turn right at the next turning, rather than just for a laugh.

How wrong we were...

At the next gap in the central reservation the lorry whipped his wheel round and pulled in right behind us!

We shit ourselves and Nick pulled over to let the guy drive off into the distance, swaying violently as he went.