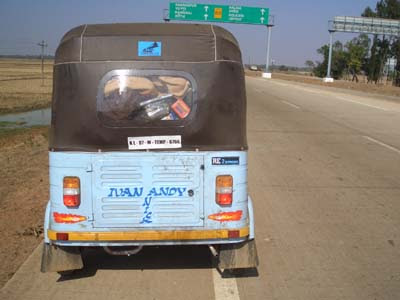 Flippin' eck the roads in this state seem to have more visible cracks and bumps than Readers Wives magazine. What a difference this is from the flat expanse of pleasure that was National Highway 5, although according to our Indian-printed map, we are still on Highway 5!

For the last 3 hours we have been bumping and swerving wildly down the "road" trying to avoid the numerous potholes, and craters that seem to be take up more of the road than the tarmac.

It looks like Nick has started to really get a feel for the vehicle, not surprising really given that he has been behind the wheel for most of the drive. But he does appear to have acquired Jedi-like skills behind the wheel pulling off maneuvering feats and swerves that are really quite scary; last minute rolls and 180 degree flips. It's mental!

My back aches from all this bumping up and down.

We've just had our first taste of mountain driving too, as the land takes a turn upwards in Orissa for the first time after the flat expanses of Andhra Pradesh.

Alright so it wasn't a full-on mountain but in this tiny cardboard piece of crap it certainly felt that dangerous as I looked out of my side of the rickshaw at the drop of 20 or so metres down. Every time a lorry or speeding 4x4 thundered past with Nick still at full throttle, it became clear that Nick was taking this event very seriously indeed.

Nice Blog, I am enjoying reading about your exploits and am jealous of the hot weather.

Looks like you're just on time, I'm online and updating right now! I hope you've started at the beginning and are working your way through, that really is the best way and it looks like the Dosa Boys may well hit the road again in June for the second Rickshaw Run!