Day 4: Zombies in the Gas station

Bloody hell that was scary.

We pulled into a gas station in the middle of Andhra Pradesh to fill up.

The forecourt was completely empty save for a few attendants, who came over and filled us up. Nick got out, Ivan got out.

I swear to you they came out of nowhere. Suddenly we were surrounded by perhaps 20 Silent Indians, all standing around the rickshaw and staring at us.

I was in the rickshaw at the back making the most of the fact that we weren't bouncing around to write up and when I looked up from my page *bang* the rickshaw was totally surrounded on all sides by silent Indian faces.

I hadn't even heard them arrive. They were like zombie ninjas or something. 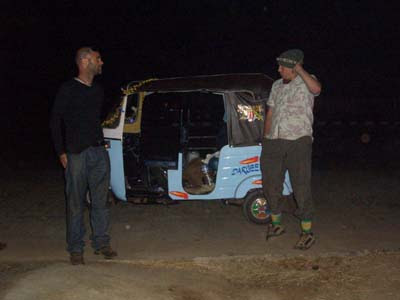 So I tried to strike up conversation.

So I pulled out the getaway card.

Ivan's most brilliant contribution to the Dosa Boys in my opinion is what I call the Getaway card, otherwise known as a Dosaboys card. Usually if we're confronted by a beggar or beggars in a funny tin-pot town we pull out our wallet and give them one of these.

While they're wondering what the hell it is and if it's worth anything we step on the gas and get the hell out of there!

This time I gave out a single card in the hope that it would occupy them long enough to carry out our fiendish plan and run away to the highway.

Suddenly, they reacted like zombies hungry for brains and a wall of hands shot into the vehicle. I'm pretty sure I felt all the air rush out of the rickshaw as they came in so fast and suddenly I found it quite difficult to breathe. The lads outside said that they also felt complete clautrophobia too as the mob outside surrounded them staring curiously at their faces from a distance of about 5cm.

It was really unnerving. I hope we don't break down in the night in Andhra Pradesh if that's what it's going to be like...