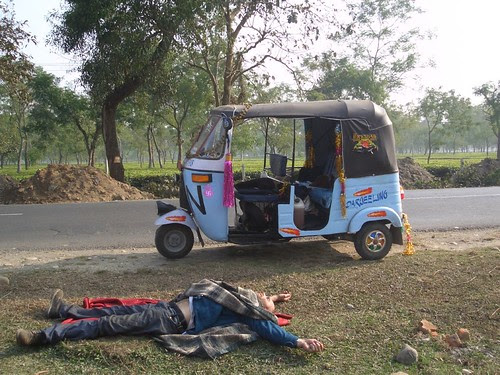 We'd been on the roads about an hour and a half, when me and Ivan started hankering for some nosh.

Most mornings up til now, Ivan and I would just wait. We'd wait, we'd grin and we'd bear a little hunger, but today was going to be different.

Nick reluctantly dropped the anchor and we pulled in for breakfast, cooked by this geezer. 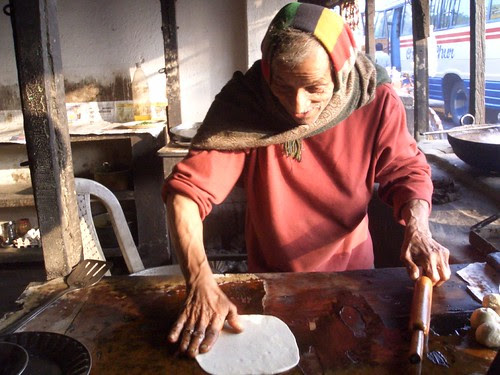 We've been on the road for more than a week, and this is the first time we've had breakfast.

As we sat inside, thin greasy pancakes and curry slipping down us, Nick sat outside in the rickshaw "guarding" it like he always did. As if anyone would do anything!

That was another thing that had got to me and Ivan. Nick had been totally paranoid about the rickshaw getting stolen for some reason! It was strange.

Anyway, he sat there, moaning about 'losing the lead' as usual when the Blunderbuss crew flew past. Nick got superbly agitated.

Me and Ivan ordered another pancake.

He couldn't resist it.

We saddled up and took to the road with the pack of three that had been in the hotel with us. I was quite looking forward to doin a bit of time with the guys and just taking it easy, but as soon as we moved off, Nick had to shoot out in front to prove how much of a man he was.

Even after everything that's happened, it's still not registered that our team do not want to race, and still he goes on trying to prove himself. It's sad to watch.

The rumour going around is that the Rajasthan Raiders have made it to Darjeeling. Who the hell are they!? Are they our mystery team? It's doubtful that it is, as rumour has it that they shot off the night before the cricket match, so they couldn't possibly have overtaken us where they did, cos logically they would have been in front the whole way.

We had hoped that this news might pacify Nick but it's done quite the opposite. He's now taken to arguing that if we had really wanted to win we would have forgone sleep totally and drove every night through the night!

To get me back in the rickshaw yesterday, Nick promised that he would stay out of the driving seat for a while and he'd calm down, and for the rest of the day he did, just throwing out insults along the way.

This morning at about 3am he was up, 2 hours or so after we'd actually hit the sack, wanting to hit the road. I knew it was too good to last.

"Fuck off" I thought. No doubt he's gonna take the wheel all day as usual so I'm gonna force him to sleep.

Ivan refused to get up and I feigned sleep for a couple of minutes, then after that, I was so tired it didn't matter anyway.

We got up at 6:30 and me and Ivan dawdled along to the Rickshaw for another day on the road.

Nick was waiting in the drivers seat ready to go.

I don't know what time we pulled into Mulda. It had been a hard day and we were all beasted.

Ivan at the wheel shot past the hotel we were looking for, where the gang of three were parked outside. I think it was the fact that Mulda had the first bit of flat tarmac that we'd seen all day and Ivan was so impressed that he had his foot to the floor.

We managed to overshoot it on the way back too and when we finally pulled in, the place was a pretty cramped and hot but we chowed down on some hotel food and knocked it on the head.

The atmosphere in the room is pretty awful. Me and Ivan are stickin together and we're unhappy to say the least.