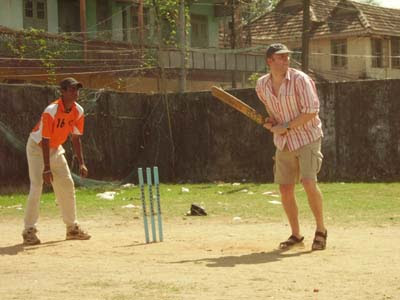 The race started officially with a nice game of cricket, in which the Dosas represented with pride. In the Rickshaw first XI was Ivan and Yours Truly mischief!!!

Given that I didn't even know who Sacchin Tendulkar was when he came to our school earlier this year, perhaps I wasn't your best choice at second bat but shucks I never say no to an opportunity.

The first dude swung the bat and hit and scored a goal or something and team Rickshaw yelled something about running to the other goalpost. So this I did and stood there pretty pleased with myself.

I had assumed that if a fella gets the ball thrown at him once and he's first up to shoot, they were gonna keep throwing it at him until they hit the posts or whatever they're called but the guys had to point out that I was actually in line to receive what I have now been reliably informed is a "bowl" (I thought that was a sort of round thing you put rice in)

So there I was on the receiving end of a bowl with this bat thing in my hand and someone yells out "Jesus, don't you know how to play cricket!?!"

I then merrily hit a 4 and replied

"No actually I don't"

That smugness wasn't to last though and I went out for 6 before the team got taken out in 10 overs for 65 all out.

Over the same 10 overs though, the local cricket team went easy on us and put away 65 goals and had 7 men sent off. I think that means they win.

Out for a duck!

Maybe we should stick to driving..