Day 1 - The other teams: The Germans 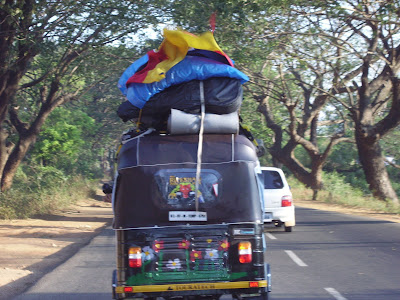 It seems there are quite a few teams taking this route up the east Coast.

Halfway down the motorway we see the Germans, 4 lads in the rickshaw with a roof rack and luggage strapped on that's about as high as the rickshaw itself! They flew past with their middle fingers in the air at 60km/h at least, German flag billowing in the wind. They have mad speed given that they have an extra person and all that luggage!

As the rickshaws are brand new we've been told to keep speeds down to 40km an hour for the first 1000km to let the engine run in.

We predict that, at that speed the lads will be in Salem tonight