Day 4: First trouble of the day 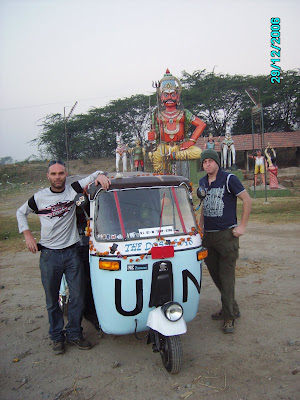 Wasn't long on highway 5 before Nick noticed that something was wrong with the steering column.

National Highway 5 is a perfectly flat, almost perfectly straight road not like anything you'd expect in India but even in the back it felt like a gravel pit. Nick said the steering was really unresponsive so we dropped into this town somewhere in Lower Andhra Pradesh for a steering column refix by this random Indian geezer in "the garage under the palm tree"

It was a pretty simple simple job, as I presume all rickshaw jobs are. Basically he got a hammer and scredriver out and hit it a couple of times. No pissin' about there then. 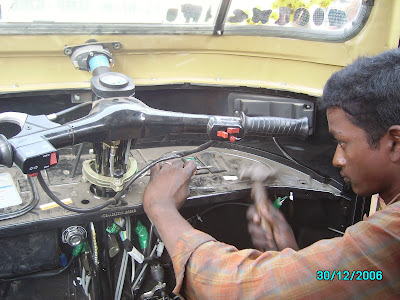 Deciding that this was all a little too easy for our man we decided to knock ourselves out and get the oil changed too. Why not eh. Seemed like a pretty good idea.

While we were waiting the police turned up, looked a little confused and asked us to move on. Bit weird. We tried to explain that we were a little busy having our oil changed but they wouldn't listen (well alright they didn't have a clue what we were saying) so the dude hurried the hell up and we were on our way.

The road feels a lot smoother now (by rickshaw standards)