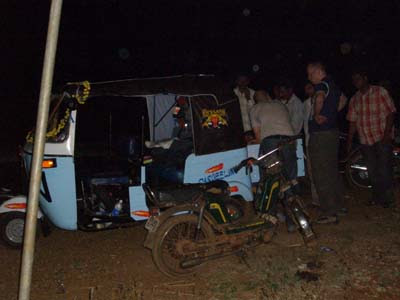 The guy and his mate have returned with a spark plug after nearly an hour. Where the hell are we if the nearest spark plug place is that far away!?

The engine has been running so hot it's still warm now and it's been off since he left. I'm no mechanic but even I can tell that there is some really bad shit going on here.

We've tried this spark plug out and nothing much has happened. When we pull up the honky lever-thing it sort of coughs a bit and refuses to start. We've tried push-starting with all Dosas + local gawking populace on hand.

The lead guy, who speaks a little English is called Sunny and he's REALLY nice. Like most Indians he keeps calling us all "Sir" which makes me feel like I'm back at school and I want to give him a little gold star. Especially now that he's gone off on the motorbike again to try to get us some petrol and 2T oil from the garage.

I can't believe that anyone would just stop like this in the middle of the motorway and randomly help out a bunch of strangers like this. What a GEEZER! He's been with us for nearly 2 hours in some form and has driven off twice for stuff. I'm pretty sure he'll be back this time.

I mean with a name like Sunny what's NOT to trust!