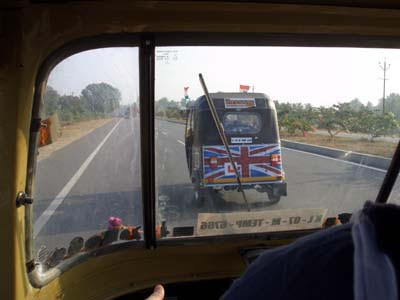 After the cricket ended we hit the road in dribs and drabs, some teams staying behind to pimp their rides a little more, adding bangin soundsystems and foghorns that sort of thing while others headed for an early start.

There's only one road out of Cochin and somehow The Dosa Boys managed not to find it for about an hour, overshooting the turn twice but when we finally hit the road we found ourselves in convoy with a lot of the others heading north.

I found out later that one team actually crashed into the gate of the school where the rickshaws were parked, and when we were about half an hour up the road one other team realised they'd forgotten their bags at the start line and had to turn round.

Suddenly the Dosa Boys didn't seem like such a shambles after all! 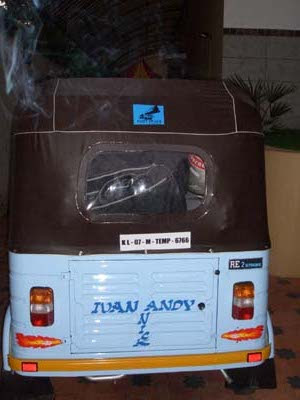 Having been told to take the first 1000km at under 40km to run the engine in we decided to take it easy today and headed for the historical town of Thurissa, which was once the capital of the state of Kerala. One Indian fella told us before we headed out that Thurissa was 27km from Cochin so we thought that the task of getting out of town and doing under 50km would be quite enough for one day.

As we got closer to our destination I kept an eye on the roadsigns.

We drove for another 5 minutes.

As we ambled along up the highway it occured to me that the rather strange was becoming rather everyday. 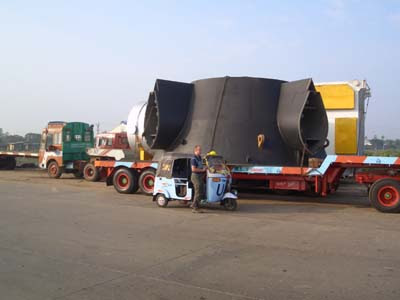 For example I didn't bat an eyelid when I saw an elephant parked outside a restaurant but all the boys found the HUGE model chicken on a pickup truck very amusing indeed.

Nick drove for the whole day today and maybe tomorrow Ivan will be on the buttons. I'm not sure how much I'll do yet. We made the 100km today with little hassle and the roads were pretty good. If it stays like this the whole way we're gonna have no problems completing this.

How much difference a day makes.