The view from the rickshaw of Andhra Pradesh is quite a contrast from the desert and hills of Tamil Nadu.

Whereas in Tamil Nadu we looked out and saw disjointed farmland broken up by these large granite boulders with painted Indian adverts for tea and underpants, Andhra Pradesh is quite different. For a start, because we have reached the coast and are driving along it on highway 5, the climate is less arid and much more bearable.

From the rickshaw, India's largest Muslim-ruled princely state is awash with a layer of deep terracota red, and is lush and verdant, an artists palette of primary and secondary colours in stark contrast to the earthy tones we had become so used to. In places by the roadside we would see piles of the red stuff being collected and at other points we've seen the Indians baking the red soil into bricks. 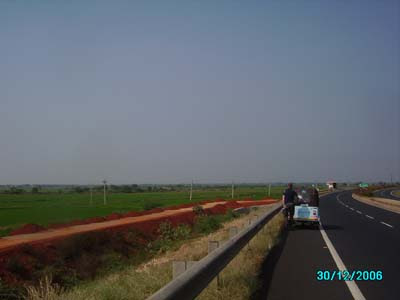 The baking process looks pretty basic. As we've shot past a load of them on the way we've seen them in different stages, so from the evidence I've seen I can sort of put together that the stuff is collected into those piles like in the picture. Then a whole team of women move it from one place to another usually about 2 metres away.

After this the guys pack the stuff together into brick shapes and the women move them again and let them start drying out in the sun.

After this they make this sort of house and set fire to some stuff inside so that the bricks really dry out and harden up.

The first time I saw that and a load of people standing around I nearly told Nick to stop the car cos I thought a house was on fire!

With no major hills for miles around and a breeze coming in from the coast, this section of highway 5 opens up some amazing vistas where we can see all the way to the horizon.

On the downside, we get this really strong crosswind, that comes across the plains and pushes the Dosamobil all over the place on this perfectly flat road.