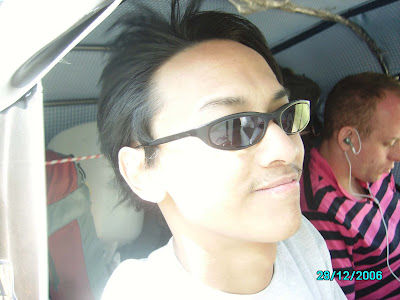 Nick has finally relinquished control of the wheel to me for the first time since we started. I've been fairly alright in the back blogging away but I must admit that I did want a little more.

Somehwere between (Middle of Nowhere) and (slightly on from Middle of Nowhere) I took the helm for my maiden voyage. As I'm not actually a licensed rickshaw driver (or for that matter a licensed driver at all) I thought I'd warm up on a side road before hitting the relatively quiet Highway 5.

Second attempt saw me pull up the clutch a little hard and we bunnyhopped down the streeet. Nick was going mental in the back about this furious that I would fuck the clutch up beyond all recognition. This was a little unfair given that he'd been driving solidly for the last 3 days that he should not even let me have the time to try to get it right.

On the third attempt the clutch started to smell funny. Oh did I mention I failed my driving test three times...?

Anyway Nick insisted on taking back the reins. Bit harsh I thought especially as I had only driven a total of 100m over the whole 4 days.

Nick insisted that we needed our clutch and gearbox if we were to have any chance of winning so I settled back in the back and carried on writing as I always do.