Dosa Boys for the Presidency 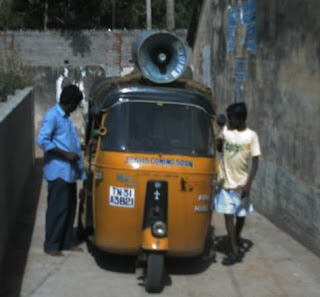 I was chattin to Nick earlier and he suggested that I do a search on google for the dosa boys, which I did.

Among the obvious finds, like the fact that we were top of the list (I mean who else calls themselves the Dosaboys!) and the links from Scoop , The Western Gazette, and The Cheese I found a few rather unusual entries.

It appears that the story has filtered over to Bombay in anticipation of our arrival and we are in the Bombay Star.

This in itself is not a particularly strange thing, after all we'll probably go through Bombay and our press release is public so of course we would love to see it anywhere.

What was unusual however was the fact that for some reason the headline "Introducing the Dosa Boys" was filed under the politics subheading, amongst such esteemed company as "I won't give up says Musharraf" and "Indian ambassador says Iran has inalienable right to go nuclear"

The mind boggles at exactly how the Dosa Boys came to be a political body, but if the Bombay Star says we are then let it be so!

Vote for us! Dosa boys all the way!