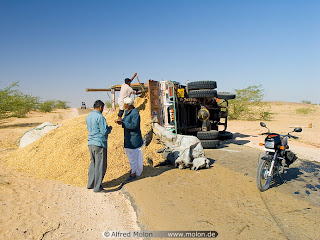 I was chatting with one of our sponsors, Mrs. L Spears in the staff room on Friday. She's an absolutely fascinating woman, and she lived in India for more than 8 years.

I asked her what a bunch of intrepid rickshaw adventurers should watch out for on the roads of India, to which she replied,

"Excuse me?" I replied, imagining that perhaps she had not quite understood the question.

"Grannies," she said, "are a major hazard on Indian roads"

Intrigued, I craned my neck forwards for more detail on the phenomenon of this rather unique Indian road hazard.

"Well" she says, "It's a bit like this. If a really poor family see a bunch of Westerners in a car, they may be tempted to throw their granny in front of the car"

The rest of the conversation was a little surreal and very amusing and between fits of laughter, I managed to work this out. It appears that the idea is thus. According to Indian law, if a person kills the breadwinner in a family, that person thus takes responsibility for the wellbeing of the family. So if a wealthy person is seen driving a car in a place of high unemployment then, along with the usual hazards of traffic lights, poor roads and psychotic lorry drivers, one should be particularly wary of overzealous projectile grannies throwing themselves under the wheels, hotly pursued by their crying families and lawyers.

Now if you ask me, that is not the fairest pension plan I've heard to date, but it certainly puts a lot of things in perspective. I mean I certainly won't be complaining about the poor state of the UK state pension again. But then I guess it also makes you realise what our charity work will be trying to achieve.

If by the end of this trip, our rickshaw can earn a family a living and they don't have to throw their gran under a passing car then surely we've done something good for the world.

So, do a granny a favour today and go to our justgiving site and stick some money in the pot. If you don't I may just be tempted to run one over and you wouldn't want that on your conscience would you...