Day 2 - Thusissa to Dharmapuri: Racing the Germans up the 47 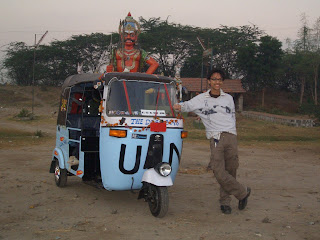 We were up at 5am just before the crack of dawn in an attempt to steal a march on the others, making sure to add further pimping additions to our ride. We bought these magnificently crap hubcaps made of cheap plastic coloured to look like the Windows logo imprisoned behind plastic spokes. The highlight of these atrococious additions was this fake plastic rose that went in the middle to screw them onto the wheel. A set of 3 cost 150 rupees, about 2 quid. 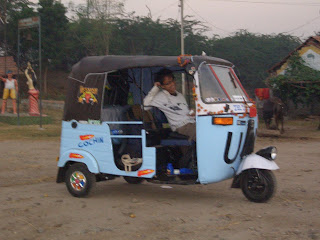 A lot of time was wasted trying to find our way out of Thurissa and this effectively killed any advantage on the other teams that we might have gained from gettin up so early. We took off into the hills surrounding Palllakad and as the 7 horsepower engine pulled us slowly over a ridge on our eastward journey to Salem we spotted the Germans coming up behind. Turns out they stayed in Thurissa last night after all! 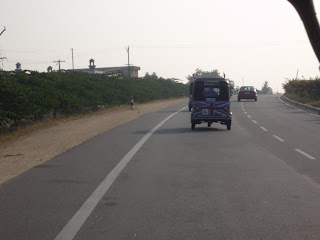 Not to be outdone, they steppped on the gas. 4 in the 'shaw and fully loaded they got up a good head of speed and flew by with their customary middle finger. 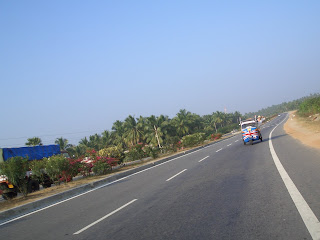 The 6 foot tall guy was at the wheel and with their luggage on top and this giant in the rickshaw the Germans have a really high centre of gravity and you could see it in the way that they leaned as they took corners. I wouldn't be surprised if they stack it by the end of the race.

They are bloody ballsy drivers too and as we raced them down highway 47 they were pullin these amazing threads through gaps of a few feet between lorries. Looks like they are really hungry to win it. 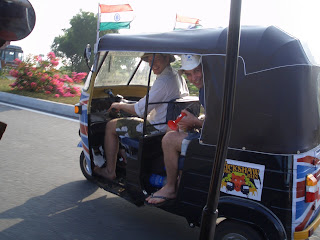 Going neck and neck with them for about 20 minutes, their balls paid off and they finally pulled away, overtaking a slow moving cement truck squeezing through a gap no bigger than a hamsters arsehole with an oncoming bus completing the sandwich. We let the go and carried on.